The term 'contracted tendons' describes a condition where the leg is excessively straight, usually at the fetlock or coronary band, i.e., corono-pedal joint, but it occasionally also affects the knees. If the condition is very severe the horse or foal may be unable to stand properly.

How does it occur? 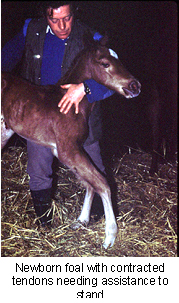 There are two general forms of contracted tendon, i.e., congenital and acquired. In the congenital condition, foals are born with contraction of one or both forelimbs. It less commonly affects the hindlimbs. The foal may be born with a degree of limb abnormality that can range from just being straighter, quite upright, through to being slightly over at the fetlock or standing on the toe of the foot, or through to a severe contracture where the knees or the fetlock and/or corono-pedal joint cannot be held straight and the foal 'knuckles over'.

In the acquired form, the affected individual is usually born with normal conformation and the contracture develops during a period of rapid growth or as a result of injury. This latter form most commonly affects the fetlock and corono-pedal joints and rarely the knees, although in some cases, particularly if the pain is due to injury to the suspensory ligament, the horse may also tend to go slightly over at the knee.

What can be done?

In young foals, the principle of treatment is to keep the foal's leg straight enough for it to walk on its toe and then stretching and correction will follow. Veterinary advice and assistance should be sought without delay. Specially padded wrap-around splints may be applied to hold the fetlock, pastern and toe forward. These must be applied carefully and removed and replaced frequently to avoid the development of pressure sores and also to enable assessment of the conformation of the limb. Standing or exercising the foal on a hard surface is essential to aid stretching and to allow the foal to move about without hindrance from bedding. Foals with one leg only affected must be encouraged to suck from both sides of their mother or they will tend to rest the abnormal leg, delaying recovery. Some young foals with contracted tendons are helped by an injection of a specific large dose of oxytetracyline antibiotics. This appears to work by the alteration of calcium metabolism or calcium availability in the tendons.

In acquired cases associated with a rapid growth 'spurt', dietary restriction to slow growth rate is often successful. This involves reducing energy intake while maintaining intake of a good quality multivitamin, mineral and trace element supplement, while the ration is being restricted. There are several good quality specifically formulated supplements now commercially available. Attention to hoof shape is also essential although it is sometimes necessary to avoid excessive lowering of the heels in these horses because the resulting pain or discomfort can sometimes just make the condition worse.

In young foals with so-called 'ballerina syndrome', where they suddenly go up on their toes, often during a period of hard ground conditions caused by drought, heel pain caused by bruising is undoubtedly involved. It is essential to examine foals daily for conformational changes during these conditions. Any foals who go straight or up on their toes should be kept in on soft bedding and given phenylbutazone ('bute') by injection to relieve pain and inflammation. Many cases, if managed early in their development, will return to normal conformation 'overnight', i.e., as quickly as they developed. If not managed early, upright feet will progress to 'boxy' or 'club' feet and permanently upright legs that may require attempts at surgical correction. 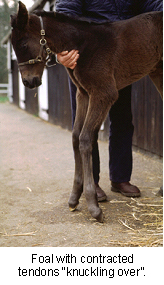 In severe cases, or in cases that are unresponsive to conservative treatment, surgery may be indicated but must be chosen carefully. Not all will respond totally to surgical intervention, sometimes followed by bandaging, splinting or fiberglass casting. For contracture of the corono-pedal joint the inferior check ligament is usually cut (desmotomy), often with immediate good results. For contracture of the fetlock joint and in more severely affected foot cases the superior check ligament and the deep digital flexor tendon (tenotomy) may need to be cut and success for these cases is not always so good. Attempts to correct carpal contracture (i.e., severe over at the knee conformation) by cutting the tendons and ligaments at the back of the knee have been attempted as a 'last resort' but have seldom proved satisfactory.

What can be done to prevent the condition?

In most instances, congenital cases will occur either as a result of positional 'moulding' effects when the foal is in the mare's uterus or as a result of developmental abnormality. It is difficult to suggest steps that will ensure this type of contracture does not occur. Nevertheless, ensuring that the mare is not overfed and that she receives a good quality multivitamin, mineral and trace element dietary supplement, and is exercised normally during pregnancy, will help to ensure that the foal is born in optimal condition. In older foals and yearlings it is important to encourage regular rates of growth i.e., avoid extremes of diet and exercise that might mean that individuals are overfed at some times and underfed at others. This includes careful management in relation to grass growth and availability as well as hard food supplementation. Regular inspection and early managemental adjustment when abnormality is noted is essential.